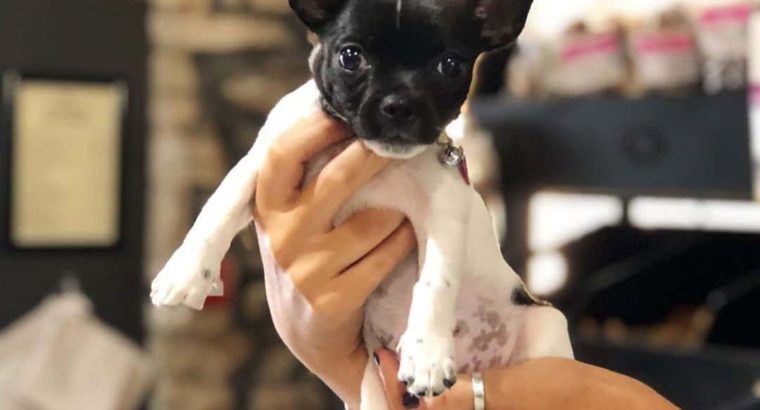 French Bulldog Chihuahua Mix(French Bullhuahua): Everything You Need to Know

Mixed breeds are a hot topic these days. This is especially true when it comes to dogs, with so many different combinations of breeds possible. One popular mixed breed is the French Bulldog Chihuahua Mix (French Bullhuahua), a cross between the French bulldog and Chihuahua breeds. They inherit some of their parents’ best qualities, making them compact, spunky, and loyal dogs. If you’re considering getting one of these pups for yourself or your family member, consider these things first! In this post, we will cover everything you need to know about french bullhuahuas!

French Bullhuahuas are mixed breeds. They go by different names, but they are mostly called Frencheenie, Chibull, and Mexican Frenchie.

The Bullhuahua is a small, perky breed that can live in an apartment. It’s friendly with everyone and gets along well with other dogs, making it an excellent companion for city-dwellers. In addition, they are compatible with small or single-person households. These tiny firecracker dogs may be vocal or “yappy” around strangers, but they are usually pleasant with family members and friends.

French Bullhuahuas inherit a lot of their physical traits from both parents. They tend to have the French Bulldog’s short head shape, giving them a wrinkled forehead when they’re puppies or adults with droopy eyes. Their ears also tend to be floppy like french bulldogs as well, but they may be slightly larger. You can also expect french bullhuahuas to have a long tail like Frenchies and the muscular legs of their chihuahua parent!

Because the French Bullhuahua is a relatively new breed, there are few size requirements. That being said, as a mix of Chihuahua and French Bulldog parents, you may anticipate French Bullhuahuas to be on the small side. The majority weigh between ten and 30 pounds and stand between six and 12 inches from the shoulder.

The French Bulldog is the most energetic mixed breed dog. The French Bullhuahua, in fact, is perhaps the most spunky of all mixed breeds. Despite their small stature, Mexican Frenchie puppies have been considered anything but meek! They can be high-energy, but they’re just as likely to want a good snuggle session on the couch. They are affectionate with their families but can be wary of strangers.

The French Bulldog does not have a hard time adjusting to life in an apartment since it is a tiny dog that needs to protect its owner. Because they are small dogs, French Bullhuahuas are noisy. This lap dog will tell you about any knocks on the door or unusual sounds from the TV. You can’t get much better when it comes to security, but the french bullhuahua is also noisy when you take them for walks.

The French Bulldog can be independent and sometimes stubborn. The french bulldog Chihuahuas are very smart dogs that pick up on training quickly if they understand your language. These dogs will need to be trained early on, so they don’t bark. They might be stubborn and not want to do what you tell them. But if you are a consistent owner, your dog will try hard, and house training won’t be as difficult then.

French Bullhuahuas are small dogs, and they need attention. They can be good for a one-person house or a family with less than 4 people living there.

The French Bulldog and Chihuahua are two popular mixed-breed dogs that share several physical and behavioral features. The French Bullhuahua is prone to some of the same ailments as the Chihuahua and French Bulldog. While most are generally healthy, a few may be vulnerable to certain health problems, which is why it is important to learn about potential problems.

The French Bullhuahua can get many health problems. Some of these include Intervertebral Disc Hip Dysplasia, Pulmonic Stenosis, and Degeneration. Brachycephalic breathing issues happen when a dog gets hot, like from heatstroke.

French Bullhuahua puppies are similar to their parent breeds in that they are prone to weight gain and have moderate to high energy levels. Maintain a rigorous daily exercise regimen for your dog, including at least one long walk with several strong play periods and shorter strolls.

The primary thing to think about while caring for your French Bullhuahua is their dental health. Brushing your dog’s teeth should be done daily since small breeds have a higher chance of dental issues. Your veterinarian can advise you on how to properly brush your dog’s teeth.

The best food for a French Bullhuahua is one that is made for small dogs with medium-to-high energy. They can get fat when they are overfed, so you should stick to a regular feeding schedule and not leave food out during the day. You should limit their amount of treats as well.

The dietary requirements of the French Bullhuahua change from puppyhood to adulthood and continue to evolve as they get older. You should obtain advice from your veterinarian on your French Bullhuahua diet since there is far too much variation among individual dogs—including weight, energy, and health—to make a specific recommendation.

Color And Grooming Of A Bullhuahua Coat

The colors and patterns of a French Bullhuahua’s coat are influenced by its Chihuahua and French Bulldog parents’ fur. Golden, brown, white, brown, black, brindle, merle, cream, and tan are the main hues of French Bullhuahuas. Their coats can be solid or have a combination of colors.

French Bullhuahuas are good for people with allergies. They usually have short coats, and they’re easy to brush. But you need to brush them every week. French Bullhuahuas are not good in the winter because they don’t have long coats like other dogs, so they need a coat. And in the summer you should keep them in the house with air conditioning.

French Bullhuahuas can be friends with animals if they are introduced to them slowly and calmly. You should do this early so that they will get used to them quickly. French Bullhuahuas don’t like other pets, but it is best to have a pet friend at home.

Many French Bullhuahuas, on the other hand, get along well with other dogs and cats, so it all depends on training, socialization, and the draw.

It is important to socialize your dog with other people and dogs. This will make them less territorial and aggressive. They might be stubborn, so it can be hard to train them sometimes.

This mix sometimes has problems with “small dog syndrome.” It’s easier for dogs to misbehave because they are small. Some new owners give up on training them and take them out of new situations. They don’t get enough socialization, making them scared of people, dogs, or new places.

Chihuahuas are often nervous and might growl when they are. It is possible to train them not to do this, but you need to be aware of it so that it does not happen in the future.

Are They Good Family Dogs?

Chihuahua French Bulldog mixes can make a good family pet. They are usually friendly and like spending time with their family. They are also small, so they can live in an apartment or smaller house. But any potential owner should be aware of the many health problems these dogs might face, so you should consider if you are prepared.

In general, we do NOT recommend owning a French Bulldog because they have health problems. Chihuahuas are also not very healthy. A mix of the two might be better than a purebred Frenchie, but it is hard to say for sure.

If you have moral scruples about breeders breeding dogs with serious medical conditions, consider adopting a dog. You will still be able to interact with the breed while avoiding supporting the breeding of disabled dogs in this manner.

What is the price of a Bullhuahua?

If you are looking for a French Bullhuahua, the price range is between $150 and $700. If that price seems expensive, remember that a purebred dog will be much more costly. You might have to pay over $1,000 for one of these dogs.

What are Mexican Frenchies?

French Bullhuahuas are one of the most popular dog breeds in America. And for a good reason, French Bulldog Chihuahua Mix provides companionship and love without requiring too much space or time commitment. But these little dogs do come with some health problems that you should be aware of before taking on a french bulldog chihuahua mix as your pet friend–especially if they have no other pets to play with at home! We hope this article has given you all the information you need to make an educated decision about whether french bulldogs are suitable for your family. If not, reach out to us today!